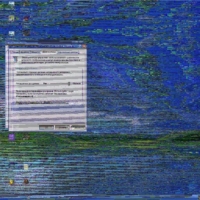 It is the graphic card operation that determines the accuracy of all information displayed on the monitor screen. This is an ultimate rule for both – desktop computers and laptops. If a separate graphic card is not installed in your computer, the processor graphic core will be responsible for displaying information on the screen.

Experienced computer users are usually familiar with the concept of graphic card artifact. Basically it is a distortion of the image on the screen, caused by improper operation of the graphic system component. Due to the graphic card artifacts some “phantom” elements may appear on the screen, some of the displayed images are doubled, tripled and distorted in various ways, resulting in a fact that it is fairly difficult or even impossible to get information from the computer screen.

Graphic card artifacts may appear due to some software or hardware problems, and in this article we will discuss the most common reasons that most often lead to these problems.

Artifacts often appear on the screen when your PC is running a resource-demanding application. For example, it can be a modern game that is heavily loading your graphics card. To fix artifacts caused by software, it is recommended to do the following:

If none of the above tips helped to fix the situation and artifacts still appear on the screen, when any productive application is launched, it is recommended to check whether the problem is related to the performance of a particular game. Artifacts can be observed on the screens of players with some certain graphic card models due to poor optimization on the part of developers. Most often, developers are fixing these errors with the first patches.

Please note: If the minimal system requirements for the game indicate the amount of memory necessary for correct operation at a level higher than that of the installed graphic card, it may often cause artifacts.

If in case of some software problems, artifacts occur only while you are using certain applications, then when the graphic card hardware fails, image distortion will be ubiquitous. That is, artifacts will begin to appear immediately after the operating system is loaded, and then they will be present everywhere in the interface and various applications. There are two main hardware reasons for the artifacts to appear on the screen:

It is worth noting that the detachment of the graphics chip can be “cured” by various services. However, if this problem occurs, you need to think about buying a new graphic card, since the restored version usually works for no more than six months, after which the chip finally fails anyway.