You are here: Home » Hardware » How to overclock your GPU (graphics card)

How to overclock your GPU (graphics card) 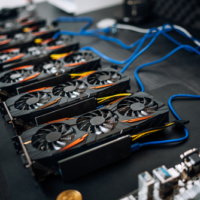 It is impossible to assemble a gaming computer that would be enough for several years of work with the most productive games and the best of graphics at a more or less reasonable price. Computer hardware is improving almost every month, and game developers are trying to tap into the power of the most productive graphics cards and graphics processors, creating high-end projects. Buying new hardware for a computer is expensive, and all gamers usually tend to get the most out of the already existing parts installed on their computers. GPU is always the first one to become outdated, but its life cycle can be extended if it is correctly overclocked.

Attention: The process of GPU overclocking is risky, and you should consider a lot of nuances that will be described below. Even with the proper graphics card overclocking there is still a high risk of its quick failure and shortening its service life.

Acceleration of computer hardware is commonly called “overloking”. Under this concept is usually considered the process of increasing the frequency of the component to much higher values than those specified by the manufacturer. That is, when producing a graphics card on the basis of calculations and tests, the graphics card developer determines which frequency will be the best for its correct operation with the installed cooler under high loads. At the same time, the chip and memory installed in the graphics card are capable of operating at a frequency higher than the regular one, and when the computer is overclocked, the user outputs them to this very frequency.

Since in the process of overclocking a GPU, the frequencies of its operation increase, along with it will come as follows:

Please note
On some models of graphics cards, in the process of overlocking, it is possible not only to overclock the active chip and memory, but also to use the computing blocks blocked by the manufacturer, if there are any of those on the board.

How the GPU is being overclocked

Before you start improving the performance of your GPU, you need to understand the technical details of the process and make sure that your computer can cope with the increased load as it will be a result of overclocking. In preparation for overloking, you will need:

Recommendation: Before you start oveclocking your computer it is better to install special programs, which will measure the heating of PC components in powerful games. Also, many of these applications have built-in stress tests that allow you to determine if the graphics card and other computer components overheat in critical mode.

Please note that when overclocking a computer, you cannot immediately increase the frequency to the desired values. It is necessary to increase performance step by step, accelerating the video card by 5-10% of the original power, and then measuring the results. To make sure that your hardware works fine at an increased frequency, run a powerful game for half an hour and examine your PC for “artifacts”, picture distortions, lags and other problems. If everything works in normal mode, you can continue the acceleration process.

There are two ways to oveclock your graphics card:

Important note: Deciding to overclock the GPU by reflashing BIOS, you need to make sure that your computer will be connected to an uninterrupted power source. If your PC will turns off at reflashing time, the graphics card will become dysfunctional and you will not be able to restore it. Below we are going to tell you about the most popular software methods for graphics card overclocking .

How to overclock Nvidia geforce GPU

Before you start overclocking your GPU, you will need to install two programs on your computer: CPU-Z and NVIDIA Inspector. The first one is designed to monitor graphics card performance and the second one in case you have Nvidia GeForce graphics card acts as an overclocking tool.

For a greater overclocking clarity it is recommended that you start the CPU-Z program before starting the procedure. CPU-Z will display all important parameters of your graphics card, among these parameters you need to memorize (or write down) indicators in these columns:

After overclocking a graphics card, the information in these columns will certainly change.

Please note
If the power supply of your computer has enough power, it is recommended to increase the Voltage slightly (by 0.05-0.07 Volts) when increasing the MemoryClock.

In the CPU-Z application, you should be able to clearly see the performance increase checking those parameters that were written down before testing began. If, as a result of all tests, your GPU is showing good results in terms of cooling, you can improve its performance once again in the manner described above.

How to overclock AMD radeon GPU

There are no fundamental differences in the process of AMD Radeon and NVIDIA GeForce overclocking. It also requires the CPU-Z diagnostic utility and an overclocking application. For AMD Radeon GPU, there are many overclocking programs available, for example: MSI Afterburner, AMD GPU Clock Tool, ASUS GPU Tweak and others. You can also use the “native” application, which is installed with the graphics card drivers and is called the AMD Catalyst Control Center.

To overclock an AMD Radeon graphics card using the AMD Catalyst Control Center you will need to: 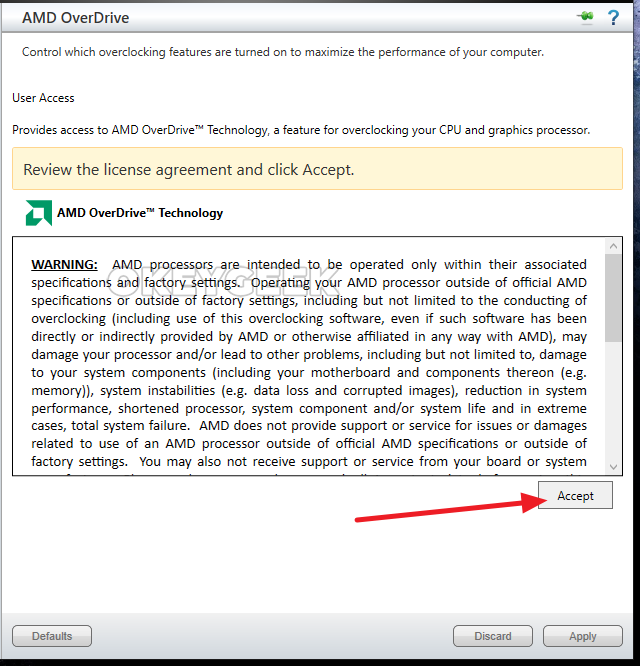 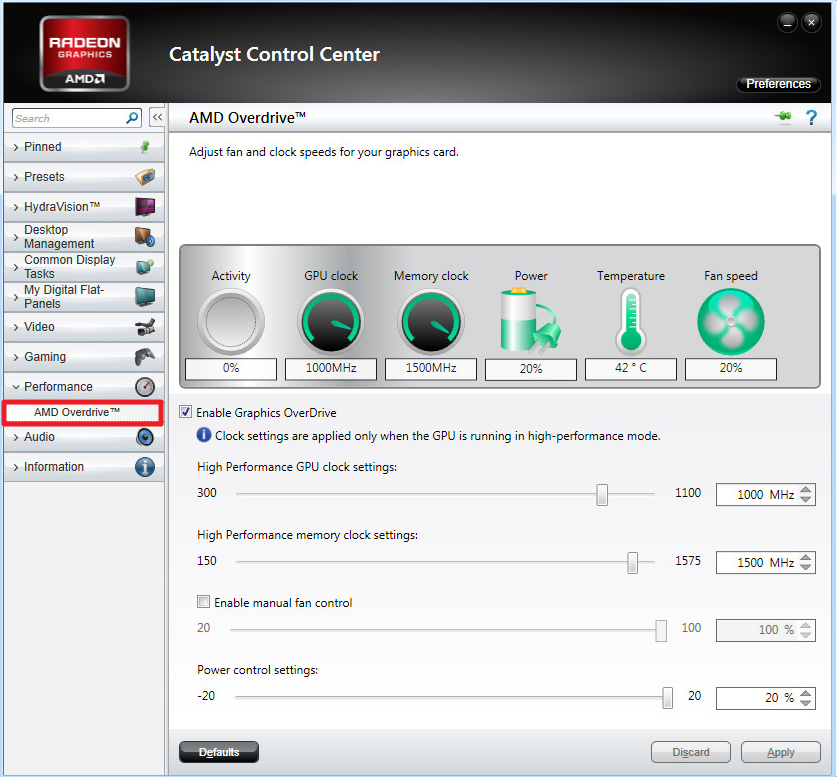 Please note
If you need a more powerful cooling for the chip, you can check the “Enable manual fan control” box and increase the fan speed.

Before you start overclocking the AMD Radeon GPU and in case your computer does not have the AMD Catalyst Control Center application, we recommend that you read some online reviews regarding various overclocking software. It will help you to choose the appropriate application for your particular graphics card model.