You are here: Home » BIOS » How to determine BIOS version

How to determine BIOS version 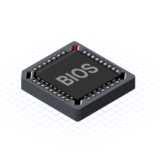 If you are a simple ordinary computer user most likely you are hardly interested to know which BIOS version is installed in your PC. But this is only until your computer will start to have problems, or until you notice some limitations in its functionality. But actually very often only updating allows to solve various problems with your computer.  For example, this procedure is necessary if there are problems with coolers operation or your motherboard has blocked functions that can be unlocked only after the BIOS update.

Before proceeding to BIOS update, it is necessary to find out which version is currently used by the motherboard. After that is done, you can check the motherboard manufacturer’s website and see if a new BIOS version was released and whether you can download it for installation. Within the framework of this article, we will show you 3 simple ways to find out the BIOS version that is currently installed on your PC.

Please note: Updating BIOS is not an easy operation and it should only be done if the current BIOS version is correlated with some problems in your computer’s operation.

HOW TO FIND BIOS VERSION BY USING THE SYSTEM REGISTRY

A lot of different data is stored in Windows Registry and that includes information about BIOS used by the motherboard. To find this information you will need to:

This is a fairly simple method, but it may not work well on all computers for this or another reason. In case you did not manage to determine BIOS version throug the Registry, try one of the following methods.

HOW TO DETERMINE BIOS VERSION BY USING THE COMMAND LINE

As you can see, this method is extremely simple, and it does not require downloading additional applications. But if it does not work for you, you can use third-party utilities to determine BIOS version on your particular computer.

HOW TO DETERMINE BIOS VERSION BY USING PROGRAMS

There are many different applications that allow you to view information about your motherboard, including the BIOS version that you are currently using.

As an example we will take one of these programs. It is called Speccy. This utility allows you to view the specifications of any computer and find any details you may possibly be interested in. You can download Speccy application online and free of charge. It is recommended to download this app only from the official website or from some trusted sources.

After downloading and installing Speccy, try to run it. There will appear a window and on the left side of this window you can select various parts of your computer and learn whatever you need about them. Select “Motherboard”, then in the right part of the window in the BIOS section will be displayed information about the BIOS version used by your motherboard. 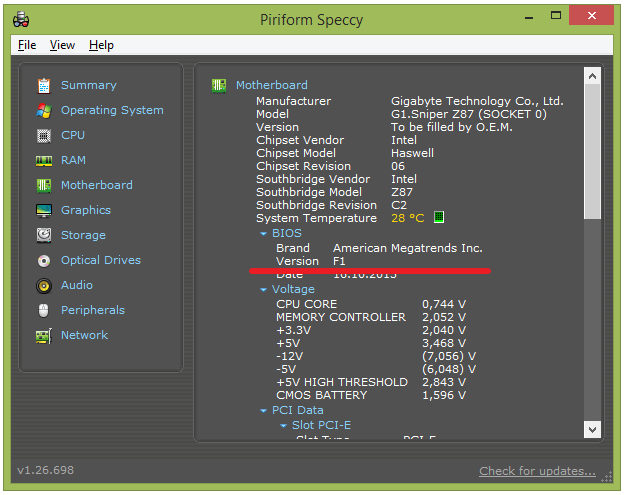 Above we have listed three simple and convenient ways to determine BIOS version installed on your PC. There are several other options, for example, you may take a look at the motherboard manufacturer’s website and find out which BIOS version is installed for your particular motherboard.  Or you can try to find this information directly on the motherboard itself. But actually these methods should be used only in case for some reason the simple options from this article did not work.

How to set boot priority in BIOS or UEFI

How to disable secure boot

How to start a computer using keyboard